The image of Oxbridge 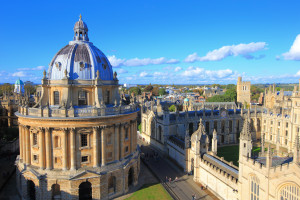 The Oxford University City, Photoed in the top of tower in St Marys Church. All Souls College, United Kingdom, England

There seem to be biannual spikes of interest in Oxbridge: one in September, when journalists start to think about those applying and give out advice about how to get in; and one in January, when we get the slew of stories about those highly qualified students who missed out on a place.

In all of these stories, there still seems to be the long-perpetuated idea of Oxbridge as a mythical place, a closed society becoming increasingly difficult to break into or understand. The Oxbridge image is about as old as the universities themselves. After Googling ‘image of Oxbridge’, images of suited applicants and students appear, followed by a range of articles, three of which include the word ‘toff’, with others focusing on ‘elitism’ and ‘negativity’. People view the universities as increasingly detached from society, with their own rules, norms and customs. This image can have a direct impact on potential students’ perceptions of the universities – just how many potentially excellent students are being affected by this image?

The issue of access is a complex thing. The media image of Oxbridge is difficult for the universities to shake off, but both are doing a great amount to increase access. Both universities allocate each individual college an area of the UK, which then aims to raise aspirations in this area, there are plenty of online resources at both universities and both have very strong bursary schemes for poorer students. Schools can also help address access issues. A lot relies on chance, with regional differences, stretched school resources, and the type of school itself all affecting the school’s ability to prepare students for Oxbridge. Schools should not be afraid to suggest Oxbridge to academically successful and engaged students.

Their aspirations can be raised to encourage Oxbridge as a possibility. Perpetuating the image of Oxbridge as unattainable and alien harms everyone: it reduces the efforts of those who have worked so hard to get there, and it only continues to discourage those who should be applying. Hard work, dedication and passion are reasons why people get into, and then succeed at, Oxbridge. This is sometimes dependent on background and schooling, but more often than not it is down to each individual student putting in the effort and savouring their learning. If students are dedicated to their subject, and to the application process, then any potential student should be excited about applying to these prestigious universities.

See our Access Scheme page for more information on how we can support potential applicants to Oxbridge.

April: Oxford or Cambridge? Deciding where to apply for Mathematicians and Scientists

What happens when exam results are BETTER than expected?

All You Need to Know About A-level Retakes

Why Law? Oxbridge interviews are notorious for being packed full of weird and wonderful questions, designed to test our knowledge of rigorous academic concepts and the thought processes behind the way we figure difficult problems out. Some questions, however, are much more straight forward: but that’s not to say that…

blog A Comprehensive Guide to the Cambridge College Essay Competitions

Cambridge College Essay Competitions Thinking of applying to Oxbridge but need new ways to get ahead of the game with your application? What plenty of students aren’t aware of is the fact that many of the Cambridge colleges hold essay prizes for students in year 12 focusing on various subjects,…

blog Demonstrating your passion for your subject

How to demonstrate your passion for your subject It goes without saying that in order to make a successful application to Oxford or Cambridge, you HAVE to be passionate about the subject you hope to study. However, sometimes making this clear to your prospective tutors and admissions officers can be…

blog All you need to know about Oxbridge Open Days

Our 2022 Guide to Oxford and Cambridge Open Days After two years of cancelled events, awkward zoom calls, and attending meetings in our pyjamas, Oxford and Cambridge have scheduled their 2022 University-wide open days to be in-person and bigger and better than ever! Whilst some department open days are still…

blog Oxbridge vs the Ivy League: what’s the difference?

Which is better for me: Oxbridge or Ivy League? More and more students in the UK and around the world are considering Ivy League Institutions as an alternative to Oxbridge for higher education. With the significant effort and dedication it takes to apply to any of the Universities in either…