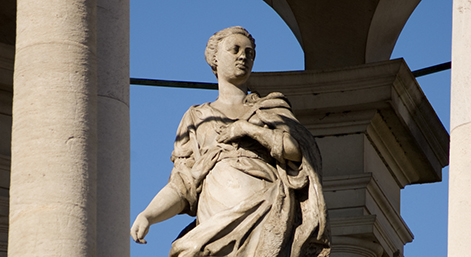 Now, this title might seem like a question for the Law blog, but it’s very much a concern of the Arts. Jonathan Jones recently wrote an op-ed for The Guardian, which was tantamount to a plea that ugly public art is taken down by the people, which is the inspiration for this month’s blog. He rallies for “workers of the world [to] rise up against bad statues,” particularly citing a statue of an embracing couple in St Pancras Station in London. In this blog, I’ll tackle what ‘bad statues’ means in the modern world, and give some interview questions to encourage you to think critically about just how ‘public’ our public space is.

Mr Jones’s article came following the news of Egyptians protesting a ‘replica’ of Nefertiti south of Cairo, which Twitter users dubbed ‘Frankenstein.’ In response to the public outrage, Samalut authorities have removed the replica, and will replace it with a peace dove sculpture. Now, this is an interesting story – not just from a political angle, whereby the increased social mobility and agency of the Egpytian proletariat allows them such freedom to criticise and enact change. But, it’s interesting because of the reason it was removed. There are countless news stories of public space being changed (rightly) because of the offence it can cause – inappropriate flags, language, symbols, all have at some point been removed from public space to ensure the safety of the public. This bust of Nefertiti, however, did not pose a threat. The ugliness of the bust could, at a stretch, be seen as causing offence to Nefertiti’s memory, but its removal was on the whole due to pure aesthetics. In the USA, the most bizarrely prominent protest over a statue has been an I Love Lucy statue in Lucille Ball’s hometown, which was again viewed as an ugly and inaccurate representation.

It’s curious, then, to think that it is enough that something is ‘ugly’ for governments to intervene and renegotiate public space. We are much more familiar with political reasons for reconstructing public space, because changing a piece of art is making a statement. A few months ago in Cape Town, a gilded, ornate statue of British colonialist Cecil Rhodes was removed from the University of Capte Town. The removal of the statue signalled a disapproval for the symbol of historical white oppression. Much like Egypt’s removal of Nefertiti, the removal of Cecil Rhodes began following public outcry and protests; a bit more luridly, this removal followed students throwing buckets of excrement at the statue in protest of its presence on campus. An even more recent and poignant example of righting public space can be found in Charleston in the USA. Following a racially motivated mass murder in a church, South Carolina residents (as well as global commentators) called for the removal of the confederate flag from government buildings in the area. The presence of the flag on the site of such a heinous terrorist act seemed unpalatable for many, and in response, a young woman climbed the flagpole to remove the confederate flag.

From Nefertiti and Lucille Ball, to Cecil Rhodes and the flag in Charleston, public space is potently charged with public opinion. While public space is created by governments and shaped by the realities of infrastructure, its meaning and use is determined by the public. If you’re studying Architecture, Archaeology and Anthropology, HSPS, History, any any course with a Politics element, this is something you will need to consider. Thinking critically about who owns and shapes public space can help you think critically about broader ideas of human agency, the ownership of historical artefacts, and the aim of government intervention. I encourage you to consider these themes and examples, and to use some of your own, to explore how you would answer these interview questions: