Resham read Economics at Emmanuel College Cambridge and graduated in 2010. She went on to work at the Financial Services Authority for nearly 2 years and is currently a researcher in the House of Lords, with a focus on International Development and increasing the number of women in Parliament and Public Life. This blog will cover current affairs with an economic twist and should help you to think about the link between economics, politics and their impact on people.

On 8th May, 2013, the Queen opened Parliament for the 60th time. The State opening marks the commencement of a session of Parliament and is held in the House of Lords Chamber. The Queen reads a speech, prepared by the Cabinet, outlining the Government’s agenda for the coming session.

What did it say?

The Queen’s speech outlined an array of measures that the Government intend to make law over the next session. A significant proportion of these measures were related to the economy and to the benefits and welfare system. The government has committed to measures which critics claim are a shift to the right in response to UKIP’s success in the recent council elections.

In contrast to previous years, the Queen’s speech was notable for what it did not include more than for what it did. Many Conservative Party MPs have been strongly critical about the lack of reference to a referendum on the EU and whether the UK should opt out. Conservative Party backbenchers have vocalised their disappointment that the Queen’s speech did not include plans to put a 2017 EU referendum into law in the next session. Due to Lib-Dem opposition, it was not possible for this to be included in the Queen’s speech, and so we are now in an unprecedented situation where the Prime Minister and his party have promised a referendum in the future, but are unable to commit to this in their current position. The Labour party, and the Lib-Dems both believe that Cameron is wrong to fix the 2017 schedule from now, although public support for the referendum has forced them to comment on their willingness to consider it.

Eurosceptic Conservative backbenchers wrote an amendment to the Queen’s speech stating that this house “respectfully regrets that an EU referendum bill was not included in the Queen’s Speech”. This amendment was fiercely debated for six hours on 15th May. Although this amendment was defeated, it is symbolic of growing discontent at Cameron’s initial refusal to include this as planned legislation in this coming session. Over 100 Conservative Party MPs voted for the amendment- the biggest backbench revolt on Europe since 2010.

Now, James Wharton MP will present a private member’s bill on the EU referendum which will hope to garner enough support, and get far enough through the Parliamentary process so the government may give it the necessary time to debate it and consider making it law. In a surprising move, Cameron has “given the full support of the Conservative Party” to the bill, and Conservative Party MPs will be under a three-line whip (the strongest order they can be given) to support the bill. The bill will be given its first reading in the House of Commons on the 19th of June, and the soonest he could request a full debate is on the 5th of July. Private Member’s bills have a historically low success rate of actually being turned into law- only 11% compared with 94% of Government bills. As outlined above, this bill is unusual as it has been given full support by the Prime Minister and the party. Only time will tell as to whether Wharton will be successful in his attempts to create this important new piece of legislation, but the journey will be an interesting one! 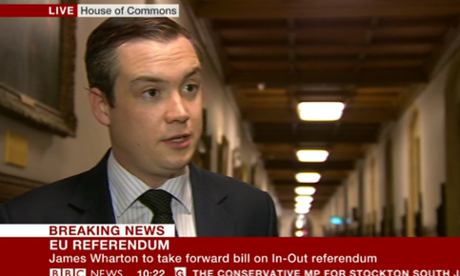 Opinion on the Private Member’s bill:

Summer is coming – Time to read!

Advice on applying with your A level and AS (Mock) results